On Saturday May 14th Roger Hammond and other hams from W0CUO and W0WWV ham radio clubs will be launching a high altitude balloon with a payload consisting of a camera to photogragh the trip and an APRS position reporting beacon to keep track of the trip. Photos will be transmitted Via SSTV, and of course some of them will end up here. The launch will occur in Aurora at the  Edgerton Explorit Center. Here is an excerpt from Rogers Blog site about his last launch: 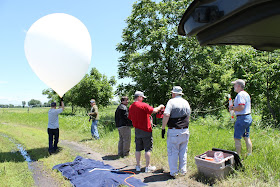 This was our first flight in almost four years. I decided to get back in the ARHAB game and launch a balloon as part of Amateur Radio Field Day festivities. These were all new payloads, except for the old trusty CW beacon. The payloads consisted of two APRS trackers, a Canon A560 running the CHDK firmware, and an Aiptek Standard Def. video camera. We launched from south of Grand Island, just off of East Wildwood Drive. We had plenty of help at the launch site. I appreciate the new faces that came out to help.
The balloon was released at 13:08 CDT. We had a catastrophic failure of one of the trackers, apparently before it ever left the ground. I believe it was a poor antenna connection, but I need to investigate. My wife, Arlene KC0ZWX, Aaron KD0ENX, and I were the tracking and recovery team. Stan N0YXV joined us for the chase in his vehicle. The ascent rate was a little ‘hot’. I have a tendency to go overboard on additional helium. Instead of the nominal 1000 ft/min we were averaging about 1200.

This made for a quicker burst which occurred at 89,164 feet, and a little bit shorter track than predicted.

Landing was southwest of York, NE in a cornfield. We spent quite a bit of time finding the landowner to get permission to retrieve our goods. After talking to neighbors and leaving several messages, the landowner called me back and gave me permission. I hiked in with GPS coordinates and retrieved the payloads along with several additional pounds of the farmer’s mud.

Your 5-Day Forecast at a Glance